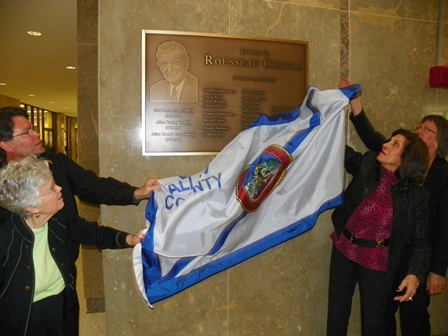 Over 100 people gathered at the former City-County Building today for ceremonies dedicating the facility as the Edwin J. Rousseau Centre.

Rousseau spent 40 years in Allen County and Fort Wayne politics, including terms on the Fort Wayne City Council, Allen County Council and the County Board of Commissioners.  He passed away in 2009 at the age of 76.

Commissioner Linda Bloom said Rousseau was “a man whose longtime service as an elected official, businessman and community volunteer earned him great respect and admiration which continues to this very day, as evidenced by the turnout for this event.”

The City-County Building served as the home for the administrative offices of City and County governments for the past 40 years.  After many of those offices moved to Citizens Square last year, the building was renovated to serve as headquarters for City and County police and the City fire department.  Several County government offices will remain in the Rousseau Centre — including the assessor, auditor, recorder, treasurer and veterans services.

Commissioner Nelson Peters said with the changes, the building continues to “fulfill its intended purpose as a leading force in bringing a better tomorrow to Fort Wayne and Allen County.”